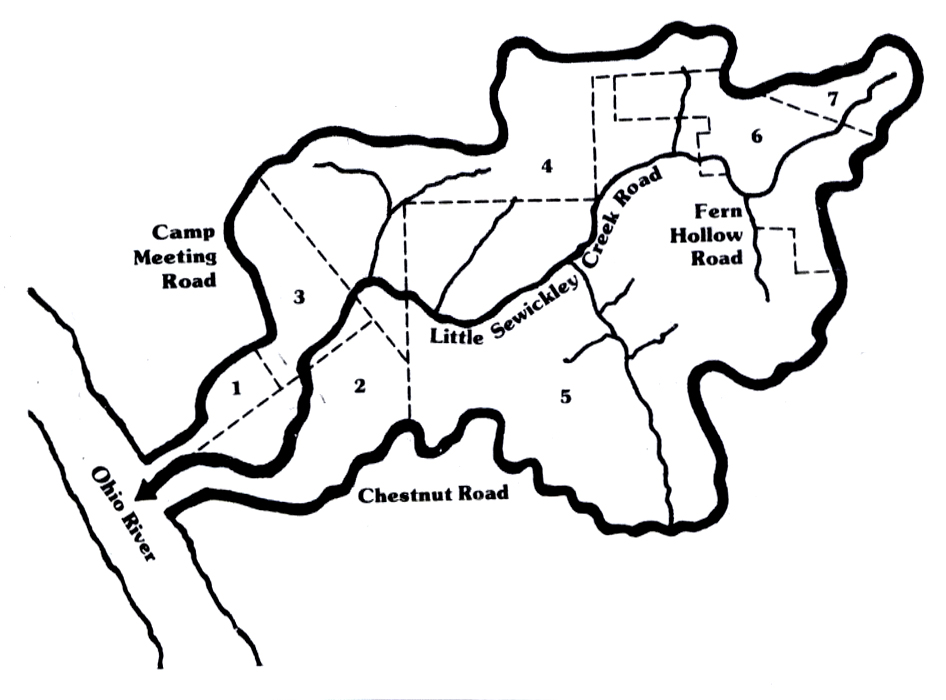 The LSCW contains parts of the following boroughs and townships:

LSCWA’s first major project was a 1978 hydrology project by graduate student Bill Neubeck from University of New York at Binghamton; local liaison was Quaker Valley science teacher, Ed Schroth. Data was collected by his high school students who then became the “Up the Creek Gang.” Not only did these science students analyze dissolved oxygen, pH, phosphates, they captured velocity readings from Stevenson flow meters at various sites on the creek as well as fish population and aquatic invertebrate counts.

As a result of this documentation, Little Sewickley Creek achieved the designation of “high-quality” cold water fishery from Pennsylvania. By 1983, under a county grant to LSCWA Green Engineering, slope stability, soil composition, and topography was mapped for the watershed using aerial photography and monitoring data. With subsequent grants, Dr. Richard Yeager of the University of Pittsburgh added information to the LSCWA maps to include house sites, hidden springs, and ancient landslides.

In 1985, teachers, Myrta MacDonald and Jane Conrad with the help of Sewickley Academy students performed an extensive plant inventory on the creek. By 1987, LSCWA introduced a summer camp to introduce responsibility about natural resources to students in 4th and 5th graders. This camp has remained in operation through the present time.

In 1987, 1991 and 1994, the Western Pennsylvania Conservancy deeded to LSCWA over 150 acres in Bell Acres for its oversight and protection. Land development issues in several of the watershed municipalities occupied the LSCWA over the 1990’s. Many were resolved in favor of conservation of natural resources and resulted in larger lot development.

In 2002, LSCWA and a grass roots group of citizens collaborated to oppose proposed water wells by Allegheny Country Club to be drilled directly underneath Little Sewickley Creek. Hydro-geological fallacies of its drilling plan defeated the plan. At that same time, Allegheny Land Trust began to acquire vacant parcels in the watershed, 34 acres adjacent to the 1,000 Acres Sewickley Heights Park and 37 acres a quarter mile away in Sewickley Hills and in 2005, 52 acres on Magee Rd.

In 2007, a LSCWA grant established the Big Sewickley Watershed Association so it could respond to run off and development issues in its watershed. That same year, LSCWA members testified to the inadequacies of the Bell Acres sewage treatment plant located upstream from its Sevin Rd. property. LSCWA board members had been monitoring that creek tributary to study the feasibility of a 2002 picnic pavilion proposal.

In 2008, a LSCWA project grew out of another sewage plant situation. A vernal pond which served as breeding ground for Jefferson salamanders had been covered over in 2005. Salamanders and wood frogs were trying to breed in the grated sewage treatment tanks. Thus was launched the “Amphibian Habitat Rescue” project. Artificial ponds were installed and sewage tanks were fenced. Population counts continue each spring.

Since 2009, the Association has monitored development of recreational ball fields on a 35-acre parcel in Bell Acres.  From 2010 to 2012, a liner, one new inflow pipe, and improved pond maintenance on the largest retention pond helped reduce siltation overflows into a large tributary of Little Sewickley Creek during heavy rain events.  In 2013, the Pennsylvania Department of Environmental Protection approved a post-construction stormwater management plan which includes five rain gardens, two bioswales and landscaping with native trees and shrubs. Once the plan is implemented, field construction can restart.

In 2012, LSCWA engaged a Penn State intern to develop methodology for eradication of the invasive Japanese “knotweed” along the creek in the upper watershed. Duquesne University graduate student, Nate Reinhart, under supervision by Professor Ed Schroth, collated and provided new data for the 2013 application for the upgrade of the creek from “high quality” to “exceptional quality” cold water fishery from the state.